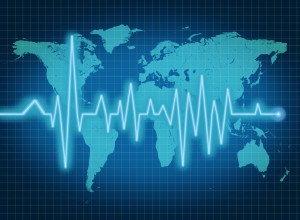 Last week, the economy continued to grind along slowly and did not show any signs of moving away from its current growth path of 1.5%, neither in an upward nor downward direction. In one sense, this is good news given the continuing unresolved European debt crisis and the fact that growth in China is slowing down noticeably.

The most important development last week was initial claims for unemployment compensation. This indicator measures the strength of the labor market and allows one to determine whether firms are increasing layoffs.

While the newly published number of 361,000 is much higher than it would be under normal circumstances (about 325,000), it has exhibited a downward trend in recent weeks. Specifically, one month ago it was 386,000, and one week ago it was 367,000. This suggests that the labor market has a more solid foundation than commonly perceived.

The reduction is a mixed blessing. In particular, when credit is increasing consumers are spending more than they take in in income. That behavior cannot be sustained over the long run.

In contrast, increases in credit indicate that consumers have enough confidence in the economy to spend more. If they lack confidence they cut back on spending and save. This means additional credit outstanding will be smaller.

This is what happened last month which is reinforced by the fact that these savings rate in the economy went up from 4% in May to 4.4% in June. The economy needs consumers to spend more in order to grow.

On the downside, the indicator of the nation’s productivity was also published last week and showed that during the second quarter, productivity was 1.7%; a significant decline from the previous quarter of 5.6%.

The Labor Department’s jobs report for the month of July indicated the unemployment rate increased slightly from 8.2% to 8.3%. The increase was in line with expectations. The number of jobs created, 163,000 was more than doubled the number that was created in June (64,000). The increase exceeded analysts’ expectations. The private sector created 172,000 jobs, but government cutbacks reduce that number by 9000.

The increase in the unemployment rate was mainly attributable to 153,000 previously unemployed workers reentering the labor market in search of work. This is an encouraging sign.