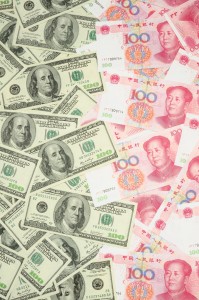 China continues to come under fire for keeping the value of the Yuan artificially low relative to the dollar and other major currencies. This makes Chinese products on the international market cheaper in comparison to those of its global competitors.

The domestic implications of low-cost manufacturing goods from China have become a focal point of Congressional debate in the US, which has stopped short of labeling China a “currency manipulator”. Nevertheless Congress, the International Monetary Fund, and the World Bank continue to pressure Beijing to allow a faster appreciation of its currency.

The question is what does all this mean?

Simply put, China has not been formally labeled as a currency manipulator, but major trading partners continue to pressure the country to allow market forces to establish the exchange-rate. However, the ability to persuade China to do so is becoming more difficult by virtue of the economic slowdown it is encountering.

China is experiencing a significant decline in housing prices and real estate values have sunk to a 16 month low. Prices in its 10 biggest cities fell .5% in April and 3.2% year over year. The world is not accustomed to seeing these kinds of growth barriers emerge in China.

The emerging growth challenges in China are related to the fact that the country has relied  on an unsustainable growth model; one that is fueled by exports and accumulation of foreign exchange. Keeping the value of the Yuan low is a crucial element of that strategy. However, China must find a way to increase domestic consumption because in the long run, this will be the only way in which it can sustain its extraordinary growth rate.

As China relies more on market forces, it will also become more subject to the ups and downs of business cycles. That is, China will ultimately face the same cycle of recessions and expansions as other market economies do. While it has an expanding market economy at its base, superimposed on the market substructure is a political system whose legitimacy is achieved by virtue of its exceptional performance.

What happens if past levels of economic performance are no longer sustainable? Will it lead to political unrest, greater centralization of the economy or a broader sphere for market activity? No one can say for sure, but it is certainly an issue that China will confront sooner rather than later.

Why should you care?

The slowdown in China’s economy is important because the country has become a dominant global economic power. China’s share of world output was estimated last year to be approximately 13 percent, which is an increase of nine percentage points over two decades. Other estimates place it closer to 16% of world output, which is only two of three percentage points behind that of the United States and equal to that of the European Union.

Two decades ago, the US and the Euro Union accounted for almost 50% of global output. However, the rapid rise of China, India, Russia, Brazil and other Asian countries have lowered their relative importance in global production.

China is a growing economy and an economic powerhouse, but it has some significant problems to overcome. In the near future, the health of the world’s economy will still be determined overwhelmingly by what happens in the US. However, Congress must be careful in how it manages its relations with China because it will certainly be the world’s dominant economy in the next generation.