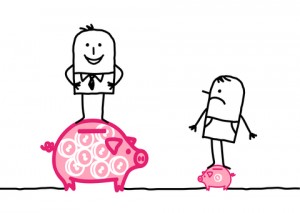 The stock market continues to break new ground, but for the majority of Americans and in particular for small and minority business owner, this development has little meaning.

There continues to be large numbers of unemployed Black and Hispanic workers, and the fiscal crisis of the government is causing them great difficulty; especially minority contractors. The latter are much more dependent on public sector contracting opportunities than are non-minorities.

The economy has undergone a roller coaster recovery that has lasted four years. The slow growth has been accompanies by the bickering in Washington, the results of which are now playing themselves out in a slowdown in jobs and loss of consumer confidence.

While the Dow is climbing toward 15,000, the majority of the population is hurting:

Those developments outweighed the fact that:

Because of the sequester, the economy is showing only sporadic signs of life.  In fact, there is a numbing quietness regarding the effects of the budget cuts on low income families.

It is noteworthy that Congress lifted the sequester regarding cut back on airport security (presumable lawmakers could travel home for recess conveniently). At the same time, certain segments of the economy are in crisis; especially those dependent on head start, Medicaid and Medicare, public housing assistance and special education programs.