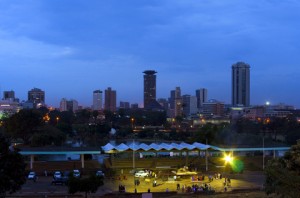 Kenyans went to the polls on Monday March 4, 2013 to elect a President and many other national and local positions.  After the disputed elections in December 2007, when the incumbent refused to leave and the chair of the election commissioner said he did not know who had won, a government of national unity was formed.

The grand coalition created the position of prime minister and a revolutionary reform of the judiciary and governing structures.

Two days after most polls had closed, only a little more than 42 per cent of the official results have been posted on the Independent Electoral and Boundaries Commission (IEBC’s) website or displayed at the IEBC’s official results center.

The major political parties and their candidates have publicly complained about the slow pace of the IEBC’s release of the official election results.  Although the two main coalitions are encouraging their supporters to be patient, this is causing tensions to rise.

As the results approach 50% of the vote, Uhuru Kenyatta continues to maintain a commanding lead at 53 percent to Odinga’s 42 per cent, with approximately 5,500,000 votes having been counted. The electronic transmission system –that was supposed to guard against fraud –has broken down and now the commission will have to depend on the official signed copies of tally sheets provided by returning officers.  As one would imagine, none of the political parties, especially the two main coalitions, have confidence in the manual counting process that was at the center of rigging allegations in the past.

There have been a large number of rejected ballots– well over 400,000 (a number greater than the total number votes garnered by some presidential candidates) and rising.  This is emerging as a central issue of debate between Odinga’s coalition and the IEBC.  It has reached the highest levels as the CORD vice presidential candidate held a press conference complaining about the slow release of the results, the larger number of rejected ballots and the early celebrations of the Jubilee coalition.

The Jubilee Coalition has accused the British High Commissioner and other “foreign agents” of engineering a rigging campaign aimed at denying them a first round victory.  The British have denied any interference.  The reason for fight over the rejected ballots is the following: if the rejected ballots are counted then the percentage difference will be significantly reduced and the outcome would force a runoff.  The law is clear; in order for someone to be declared president he must win 50%+ 1 of the votes cast.  It does not say valid votes.

Thus far, all of the main international election observer missions have issued positive statements on the Kenyan electoral process..  Some criticisms were raised regarding a few  administrative problems, mainly those associated with the failure of the biometric data voter registry machines; long delays and long lines (up to 8 hours in many cases) for citizens to vote and the violence on the coast in Mombasa where 7 policemen were ambushed and killed.  The international observers also commended the security forces, the media and Kenyan citizens for the high turnout and the patience displayed, thus far.