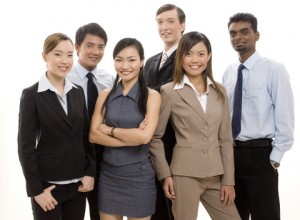 While they are less dependent today, they nevertheless still derive a significant portion of their revenue from government contracting.

EuQuant’s research indicates that overall, small businesses that are registered contractors to the Federal government derived 36.1% of their revenue from government contracting.

White business owners derived the smallest share (26.5%) while Native Americans derived the largest share (96.8%). Given the fiscal austerity policies now being implemented at all levels of government, minority businesses must strategically diversify.

At the startup and early expansion stages of business development, MBE programs were critical in providing minority entrepreneurs access to markets and business opportunities in diverse and fast-growing industries that would not have been available otherwise.

In fact, one can date the modern era of minority business development to the establishment of MBE programs. The opportunities they created provided pathways for minority entrepreneurs to move out of small scale retail and personal service establishments and into more dynamically growing industries such as engineering, telecommunications, professional and scientific services and specialized and heavy construction.

MBE programs were the products of the victories of the civil rights movement; wherein affirmative action programs were established remedies for past and present discriminatory business practices.

In addition to denying government contracting opportunities, segregation relegated minority businesses to markets within their own communities. By contrast, MBE programs created opportunities for minorities in industries that were previously not accessible.

MBE programs greatly facilitated the startup and expansion stages of minority business development. However, firms often hit a brick wall around $3 million in revenue for service firms and $30 million for construction and manufacturing firms.

Ironically, certain policies of MBE programs made it difficult for minority businesses to break through the brick wall and achieve greater scale and capacity. For example, policies such as restrictions on the personal net worth of program participation limited MBE access to bonding and capital; because both are dependent upon personal net worth.

Minority firms often found themselves in a position of being “too small to be big and too big to be small”. That is, when MBE exited or graduated from MBE programs, they found it difficult to compete successfully.

This problem was made worse by the lack of business opportunities in the private sector and the failure of MBEs to diversify their sources of revenue; rather than depend almost exclusively on government contracting opportunities.  However, given the fiscal austerity of government agencies today, minority businesses must diversity if they wish to experience continued growth.