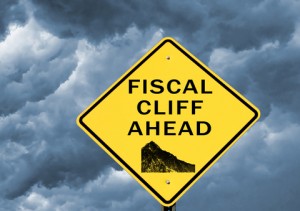 If Congress does not have the courage or willingness to develop a sound plan to reduce the debt and balance the budget by raising taxes and cutting spending, then it is better to face the fiscal cliff. Kicking the can down the road will cause much more pain in the future.

Failing to address the fiscal cliff will certainly cause economic trauma in the short run. In all likelihood, the economy will slow down so much it may enter a recession.

However, if lawmakers do not address the debt crisis with a sound fiscal plan, the long-run consequences will be apocalyptic.

The current environment is tumultuous from an economic and political standpoint. Added to this, the likelihood of hitting the fiscal cliff hovers over the economy like a bird of prey waiting to attack a wounded animal.

Analysts talk about the fiscal cliff with the same hysteria they used to characterize Y2K. However, there may be some unintended positive consequences of the current situation.

First, we will probably never again see in our lifetime the majority of the national electorate willing to vote in favor of increasing taxes. So one advantage of the current situation is the cover it provides to Congresspersons, who have the courage to look beyond their narrow political agenda and make the hard choices that must be made.

On the other hand, if under current circumstances, Congress is not willing to make hard choices to balance the budget and reduce the federal debt; it may never have the courage to do so.

As a result, we will be better off by facing the short-run trauma of the fiscal cliff than the long-run Armageddon that will result from failing to develop a comprehensive deficit-reduction plan.

Consider the following; Democrats, Republicans and President are stalemated on whether or not to reverse the Bush era tax cuts for less than 1% of the population. Imagine how much more difficult it will be when time comes to reverse the payroll tax reduction by moving it back up to 7.2% from its current level of 5.2%.

Congress has dodged this issue so far and focused instead on reversing the Bush era tax cuts for individuals with incomes above $250,000. However, even if this is successful, it is only a small chunk of a big elephant that must be swallowed.

The fiscal cliff and debt reduction debate is forcing the country to make tough choices about the quality of life we will have in the future. Here is just a taste of what will happen if the current tax and spending policies are not reversed:

What do these circumstances mean for the average citizen?

The budget crisis must be addressed because the future quality of life in America depends on the decisions we make today. The fiscal cliff is a figurative expression designed to convey the economic pain that is likely to occur if the tax cuts and spending policies, put in place by Congress and the President tall expire at one time.

While hitting the fiscal cliff will be traumatic, failing to address the debt crisis and budget deficit with a reasoned plan will be catastrophic. Therefore, it is better to let the fiscal cliff happen than to play around with the country’s future financial stability.