Last month, the economy created over 170,000 jobs, but black unemployment increased from 13.4% to 14.3%. With the presidential election over and the economy showing significant signs of growth, it is time now to address the crushing burden of unemployment among blacks.

For blacks, vigorous economic growth will help, but is far from sufficient to address their long-standing unemployment problems.

The economy is finally showing notable signs of growth; 171,000 jobs were added in October, and job growth estimate for the preceding month of September was revised upward by 30%. Over the last five months, the economy has added over 850,000 jobs.

Although the unemployment rate increased from 7.8% to 7.9%, the increase was caused by the labor market expanding by almost 600,000 workers, i.e. workers reentering the labor market. This is a sign of confidence on the part of workers, in the belief that they will find employment.

However, the fact remains that even when the economy begins to grow in a sustained manner, blacks will still endure the brunt of unemployment.

Black unemployment is now a major challenge that the Administration and Congress must confront head-on. Blacks are about twice as likely to be unemployed as are whites, but the most onerous burden is that blacks make up 11.9% of the workforce but constitute over 20% of all unemployed workers.

Two statistics can convincingly illustrate the fact that economic growth does not trickle down to blacks sufficiently. First, December 2007 was the peak in the business cycle prior to the last recession. At that point, the unemployment rate for whites was 4.4%, but the rate for blacks was 9.0%.

Second, the best quarter of economic growth the US economy has experienced in the last decade occurred during the fourth quarter of 2003. GDP grew at 6.7%, but the unemployment rate for blacks was 10.6%. 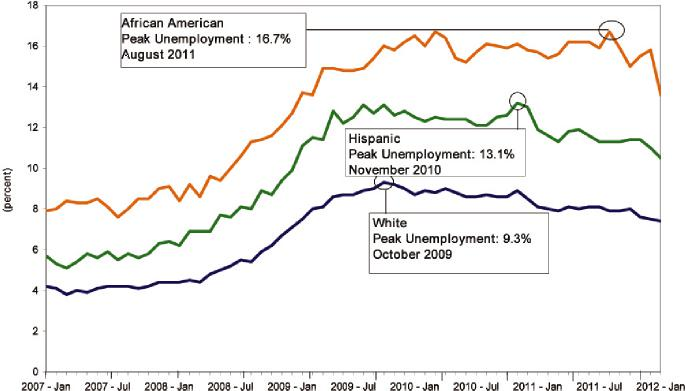 Other Problems that cannot be solved by Simply Growing the Economy

The Gazelle Index Staff calls on the White House and Congress to establish a National Commission on Black Employment; similar to what was done to deal with the automobile industry crisis. The problems are multifaceted and a commission could identify the most appropriate policy solutions. Incremental policy changes such as job training programs are nice, but are not likely to make a significant difference.

Clearly, economic growth alone is not sufficient to reduce the disproportionately high rate of unemployment among blacks. In fact, there is no scenario wherein the economy can grow enough to reduce black unemployment to levels experienced by whites.

It is now time to push the discussion of economic recovery beyond the issues that currently occupy the nation’s attention, such as economic growth and the fiscal cliff. We must now focus on the devastating effects of unemployment among blacks.