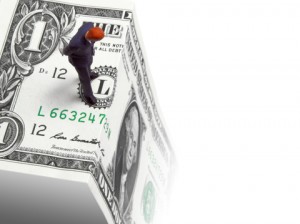 The fiscal cliff is a figurative expression designed to convey the economic pain that is likely to occur if the tax cuts and spending policies, put in place by Congress and the President to stimulate economic growth, all expire at one time.

Many of the policies set to expire on December 31, 2012 were put in place to help the economy recover from the deep recession. Other automatic spending cuts were established during the debt ceiling debate.

Congress could not reach a rational compromise on cutting the deficit, so it put in place draconian spending cuts that would kick in automatically if no debt compromised were reached by the end of 2012. Congress thought the measure would force them to compromise—it has not. Therefore, the cuts will start January 1, 2013.

By coincidence and by design, virtually all of the stimulus measures enacted by the President and Congress will end December 31, 2012.

According to the Congressional Budget Office, if nothing happens the spending cuts and tax increases will slow the economy’s growth to .5% in 2013 (-1.3% during the first half of the year and -2.3% during the second half). This slow growth almost guarantees a recession.

Alternative minimum tax (AMT): This will limit the tax deduction allowed for state taxes and miscellaneous itemized deductions. Taxpayers whose incomes are above the exemption level will pay taxes at the regular federal income tax rate or the AMT, whichever rate is higher. –This will reduce the deficit by $221 billion in 2013.

Reduction in the employee payroll tax; Payroll taxes will go back up to 7.2% of earned income, from their current level of 5.2%.  This will reduce the deficit by $95 billion in 2013.

Other expiring tax provisions; These include higher taxes on investment income and taxes that are included in the Affordable Care Act — This will reduce the deficit by $83 billion in 2013.

Automatic Cuts: Across-the-board spending cuts will be made to non-security programs such as Medicare and to security programs such as the Department of Defense, Homeland Security, and Veterans Affairs.  The cuts include army and naval operations, National Park Service, Security and Exchange Commission salaries, food safety workers, rural rental assistance, healthcare exchanges, etc.  — This will reduce the deficit by $65 billion in 2013.

Total budget deficit reduction caused by the fiscal cliff, i.e. tax increases and automatic spending cuts is estimated at $607 billion.  However, those cuts will come at a significant cost in economic growth and jobs. More importantly, they will almost certainly cause a recession.

Should we reach the fiscal cliff, it will mean a significant reduction in spending by the government, consumers and businesses. This will likely drag the economy into a new recession, just as it is beginning to show broad signs of life in regards to economic recovery.

The fiscal cliff is nothing more than a large stimulus working in the reverse direction. For this reason, it is imperative that this issue be addressed. We talk about what can be and should be done in a follow-up post.