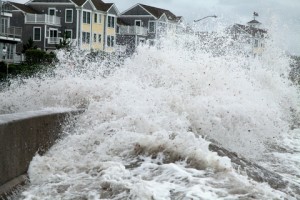 The economic impact of Sandy has been estimated at $50 billion, about one-half the impact of Hurricane Katrina. While the loss of life has not been nearly as devastating as was the case for Katrina, the destruction of property and hardship imposed on persons who were in the path of Sandy is unimaginable.

As the focus turns to rebuilding, some analysts are underestimating the economic impact of the storm. They believe, mistakenly, that dollars flowing into the northeast region from the federal government, and the expenditures made by households to rebuild, will in the final analysis add jobs and income; ultimately offsetting the damage. However, this view is shortsighted.

What they are looking at is the positive multiplier effect of new dollars flowing into the region. Each dollar spent becomes income to someone else who also spends. The eventual effect is to create more income and spending than was injected originally. Furthermore, it is generally the case that every $1 million of new construction dollars adds about 22 jobs. This sounds good on the surface.

Sandy is having a devastating effect in the Northeast region. Estimates put the total property damage between $10 billion-$20 billion and insurance losses at $5 billion-$10 billion. The overall impact has been estimated between $30 billion-$50 billion; considering disruption of air travel, interruption of retail sales, insurance losses, the shutdown of Wall Street, interruption of power supply, and destruction of the infrastructure and power grid. This does not even consider the loss of life and adverse effect on the quality of life.

This total estimate is about one-half the cost of Hurricane Katrina in 2005, which was estimated at $108 billion without considering the 1200 deaths it caused. It is difficult to know the full extent of hurricane Sandy. Unlike Katrina, which disrupted a central hub for shipping, oil and tourism, Sandy has disrupted the economy and infrastructure of the world’s busiest commercial center.

Furthermore, while people focus on the economic gains of reconstructing the area (which is a short-run boost) what they fail to recognize is that most of the expenditures represent substitute purchases. That is, when people spend money rebuilding, they must therefore give up other purchases they would have made, such as a new car or a vacation.

The Gulf coast has been rebuilt since Katrina, but it is a stretch to argue that things are better in the region now than they were before the hurricane, as a result of the reconstruction expenditures.

Like Katrina, most people affected by Sandy will rebuild, but a significant number will relocate away from the region and the coast, fearing a repeat of the disaster. In the future, it will also be more difficult to persuade corporations to locate major supply hubs in the disaster struck region. This is the challenge that Japan is confronting as a result of the devastating tsunami.

On balance, the Northeast region devastated by Sandy will be reconstructed. However, it will likely never regain the complete economic footing that was washed away by the floodwaters. Reconstruction dollars will add jobs and income, but in the final analysis the spending is simply replacing wealth assets that were lost during the hurricane. Replacing lost assets requires money that would have been spent on other goods and services, but must now be spent rebuilding.