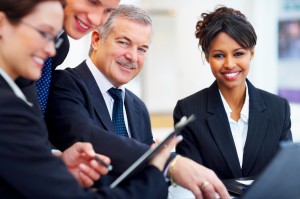 At startup and early expansion stages of business development, a large percentage of black and Latino companies depend upon local, state or federal minority business enterprise programs (MBE). In particular, federally registered MBEs exceed their representation among all small businesses in the country.

The advantage of government contracting is that it provides access to market opportunities for minorities that are often not available in the private sector.  The disadvantage is that minority firms frequently become heavily dependent upon government contracting. This causes their businesses to hit a brick wall when it comes to scaling up beyond the second stage of growth, which is about $3 million for a service firm and $10 million for a construction or manufacturing firm.

In a recent study, conducted by EuQuant (which powers the Gazelle Index), the results indicated that Latino-owned businesses comprised 8.3% of all small businesses in the country, but they are 10.8% of small businesses registered with the Federal government. Latinos comprised the following percentages of industries for small business federal contractors: building construction (18.7%), specialty trades (13.9%), paper, printing and related manufacturing (13.4%), and heavy construction (12.7%).

Black-owned small businesses are even more dependent on government contracting than Latino businesses are. Blacks owned 7.1% of all small businesses but made up 15.3% of federally registered contractors.  Blacks comprised the following percentages of industries for small business federal contractors: internet publishing and telecom (24.9%), building construction (21.5%), professional, scientific and technical (20.0%) and paper, printing and related manufacturing (18.8%).

Government MBE programs are often critical in early stage growth because they provide minority entrepreneurs access to business opportunities in diverse and fast-growing industries. In fact, one can date the modern era of minority business development, particularly among African-Americans to the establishment of minority business enterprise (MBE) programs in the late 1970’s and early 1980’s. To a lesser extent, this is also true for Latinos.

For most of the last century, minorities businesses frequently encountered racial barriers because of the practices of Jim Crow segregation. Typically, during that period, minority business persons had little or no access to external capital, non-minority markets, corporate supply chains or government contracting opportunities.  Therefore, MBE programs created market entry points for minority entrepreneurs beyond the “mom and pop” retail and personal service establishments that were typical of the segregation era.

MBE programs created pathways and points of market entry for minorities in industries that were previously unavailable because of discriminatory barriers and the good old-boy network-examples include heavy construction contracting, technology and communication, engineering, scientific and technical services.

While government programs considerably facilitated the startup and expansion stages of minority business development, those firms often hit a brick wall at about $3 million revenue for service firms and $10 million for construction and manufacturing firms.

Therefore, black and Latino entrepreneurs must think strategically about how they how they use MBE programs as part of their overall growth strategy. Those programs are beneficial to businesses that are in the first and second stages of development, which are the start-up stage and the early growth stage. However, they have many limitations for later stage growth and for businesses that are planning to scale up.