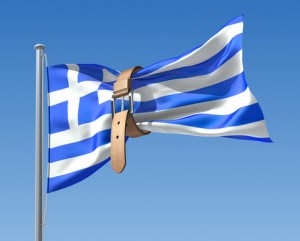 Greece’s Parliament passed a tough austerity measure yesterday, and 100,000 protesters took to the street hurling fire bombs at police and setting buildings on fire. The measure created widespread rioting because it called for additional layoffs of public sector workers (about 15,000 by the end of 2012), cuts in minimum wages estimated at 22%, further government spending cuts of around $430 million, and further cuts in government pensions.

These preconditions were imposed on Greece by the Euro-zone Finance Ministers, the International Monetary Fund (IMF) and especially Germany. Greece has over $265 billion in privately held debt. In exchange for imposing the austerity measures, Greece would receive assistance that would allow it to avoid going into default.

Ultimately, the finance ministers are demanding that Greece reduce its debt to the Gross Domestic Product (GDP) ratio from 165% where it stands today to 120% by the year 2020. GDP is the total value of goods and services that are produced within a country each year. Greece’s debt is currently 1.65 times the value of goods it produces each year.

According to the World Factbook Greece’s sovereign debt ranks fourth highest in the world. Closely following Greece are three other debt ridden Euro-zone countries: Italy 120%, Ireland, 109%; Portugal 103%. Their debt ratios fall within the top 12 most indebted countries in the world. Spain is also struggling to avoid default— its debt ranks 31 and is equivalent to68% of its GDP.

In response to the austerity measures taken by Greece, the Euro-zone Finance Ministers, the International Monetary Fund (IMF) and Germany are considering a bailout package that would include a debt swap. Under the swap arrangement, new bonds will be issued to financial institutions that hold Greek debt in place of the bonds they currently have. However, the value of the new bonds will likely be lower by 50 to 70%.

The stakes are high for US banks because it is reported that Bank of America currently has over $17 billion invested in five of the euro zone’s most debt ridden countries,  J.P. Morgan has $14 billion, Citigroup has $14 billion, and Morgan Stanley and Wells Fargo each has $3-$5 billion. To prepare for the likelihood of a default, these financial institutions have been increasing their financial reserves. The increase in cash reserves means that less money will be available for domestic lending— an outcome that has the potential to slow down US economic growth.

The ability of the five European countries to restructure their debt is critically important to large financial institutions in the US. It is reported that Bank of America currently has over $17 billion invested in the five countries, J.P. Morgan has $14 billion, Citigroup has $14 billion, and Morgan Stanley and Wells Fargo each has $3-$5 billion. To prepare for the likelihood of a default, these financial institutions must increase their reserves, which force them to cut back on domestic lending. Ultimately, those cutbacks could hurt US growth.

When Greek Prime Minister Lucas Papademos pushed through Parliament the tough austerity measures, it allowed the country to qualify for a $172 billion bailout package and avoid defaulting. A final decision on the matter will be made by the Euro-zone Finance Ministers on Wednesday, February 15th. A positive vote from that body is heavily contingent upon parliamentary approval of the austerity measures.

Germany appears to hold the trump card in all the negotiations. It is demanding that the austerity measures be approved by all parties, including the finance ministers and the IMF. Furthermore, it wants assurances that new elections in Greece, which are likely to be scheduled for April, will not lead to the annulment of the agreement.