The largest percentage of Native American/American Indian owned businesses was concentrated in professional, legal, engineering and scientific industries (21%) and secondly in building construction (18.9%).

We examined the industries and regions in which Native American/American Indian businesses achieved their highest revenue.

The analysis does not include Alaskan Natives, Native Hawaiians nor Asians and Pacific Islanders because they will be covered in subsequent articles.

Also, future articles will look at the performance of businesses owned by African-Americans, Hispanics/Latinos and Subcontinent Asians.

During the first quarter of 2013, the US economy showed surprising strength. Unemployment continued to decline gradually; the housing sector recovery picked up steam, and the stock market posted record highs.

These developments occurred despite the political bickering in Washington over tax issues. The sequester damaged growth, but not by as much as was anticipated.

This is the second in a series of articles that will examine how small businesses performed over the last year.

Median revenue is the midpoint; that is, the amount that one-half of firms earned more than and one-half earned less than. It is an important measure because its value is not skewed by a large amount of revenue accruing to a small number of firms.

Regionally, 46% of businesses were concentrated in the South and 34% in the West. However, revenue was highest among businesses that operated in the Midwest ($5.6 million) and those located in Puerto Rico, Hawaii and other Pacific Islands ($4.5 million). 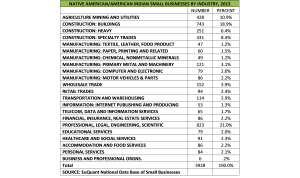 In comparison, among all small-business owners, 23.8% were concentrated in professional, legal, engineering and scientific industries and only 7.3% in building construction.

Building contractors had the next highest revenue ($3.7 million) followed by businesses operating in transportation and warehousing ($2.9 million), see Figure 2. 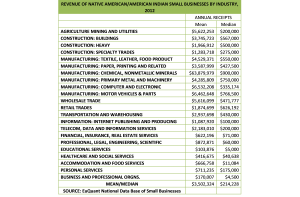 The highest revenue was earned by businesses located in the Midwest, $5.6 million. Businesses in the West recorded the lowest average revenue ($1.9 million), see Figure 3.

In the next article, we will examine businesses owned by African-Americans.