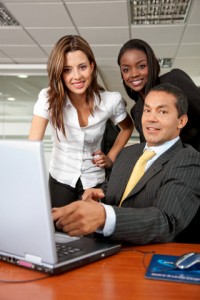 The ethnic composition of the average neighborhood where Latino businesses are located is 37% Hispanic. Similarly, Black business owners not only locate in neighborhoods that are 44% African American on average, but two-thirds of their employees are black.

The President and Congress are struggling to find ways to reduce the large number of unemployed workers, especially among African-Americans, and to a lesser extent, Latinos. The solution is easy – provide greater support the growth and development of minority businesses.

The search for a solution to high unemployment has led analyst to focus on the employment potential of small firms. Within this market segment, researchers have intensified their study of start-ups, innovative firms, and the characteristics of firms that are most responsible for creating new jobs and terminating existing jobs.

They have found that the job creation process is complex and multidimensional. To understand it, one cannot just focus on small firms per se. This is because the real job creators are small, start-up enterprises with high growth potential.

Unfortunately, analysts and policymakers have not broken down the small business sector by the racial and ethnic ownership of businesses. Why is this important? The Census Bureau’s surveys of minority-owned businesses indicated that between 1982 — 2007, businesses owned by African Americans increased from 308,260 to 1.9 million or by 523%.

This is a development of significant importance.  In all previous surveys, the rapid growth of minority-owned businesses was confined almost exclusively to firms that did not have paid employees.