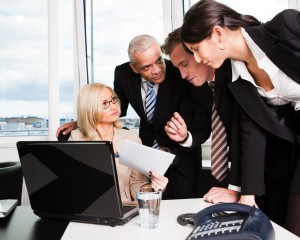 This fact indicates that minority businesses pursue government contracting opportunities to a much greater extent than do businesses owned by whites.

There were 19,237 minority-owned small business concerns (SBCs) registered with the government in 2008. Black owned businesses comprised the largest number, representing 15.3% of all SBCs. In contrast, blacks made up only 7.1% of all small businesses in society.

Blacks were followed in respective order by Hispanics, who comprised 10.8% of all SBCs and in comparison only 8.3% of all US small businesses.

Asian and Pacific Americans and Subcontinent Asian Americans represented 10.3% of all SBCs and 7.2% of all small businesses.

Native Americans represented 4.7% of SBCs and only .9% of all small businesses.

Finally, white-owned businesses comprised 59.3% of all SBCs and 79% of all small businesses in the US.

During the era of Jim Crow segregation and immediately afterward, discrimination manifested itself in many ways including the following: exclusion from bank loans, red lining minority neighborhoods, restrictive and exclusionary licensing and distribution practices, mortgage lending discrimination and discriminatory white consumer purchasing patterns.

As a result, minority entrepreneurs who sought to go beyond the traditional racial barriers of the market place pursued government contracting as a solution.

Government procurement gave minorities the opportunity to enter faster growing, more diverse and nontraditional industries such as professional services, technical and engineering services as well as specialized and heavy construction services. The result transformed the character of the minority business sector and created employment opportunities for minority workers.

Additionally, government opportunities prompted an increase in minority business startups and lead to the formation of more successful companies.

While business disparities by race and ethnicity still exist, unlike in the past, the typical minority enterprise is no longer a “mom and pop” establishment engaged in low value personal service and small-scale retail activities.  Government sector contracting opportunities played a major role in this transformation.