Despite the popular myth, high growth companies operate in many industries –  not just information technology. It is important to make note of this fact. By so doing, we hope to encourage greater diversification among small and minority entrepreneurs.

One of the biggest myths regarding high growth small firms is they are concentrated mainly in the technology sector. Nothing is further from the truth!  Yet, the myth continues. This myth ranks #2 among the biggest misconceptions of high growth companies.

To shed more light on high-growth companies, we have generated the table below which separates over 600 small businesses that participated in the Gazelle Index national survey into two categories; high performing companies and others.

The survey is based on 631 responses from randomly selected CEOs who operate businesses with 10 to 100 employees. The results have a margin of error of + or -5% for each race and gender group. Minority business owners comprised 55.6% of respondents, women made up 38.7%; blacks accounted for 33.6% and Latinos, 19.8%.

One survey question was used to identify high-performing companies from others.  The question asked respondents to compare their employment size today with the size prior to the last recession. There were six categorical answers. The categories and responses are as follows:

The results indicated that 22.6% of small businesses experienced an increase in employment since the great recession. The businesses that fell into this category were classified as high performing.

An asterisk appears beside industries that have large differences.  The most significant differences occurred in agriculture, extractive and landscape services; health, education and social services; business services; construction; retail trades.

In contrast, there was a much lower concentration of high-performing businesses in construction services and retail trades.

The results illustrate that high performing companies are not all information technology enterprises. They exist in many industries. However, they are least likely to be found in construction and retail trades. 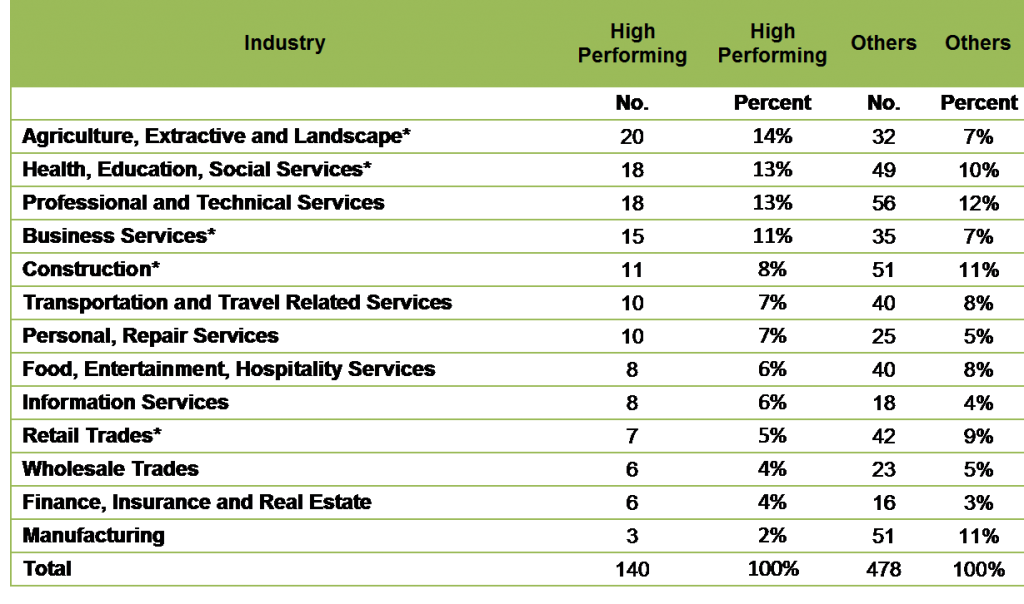