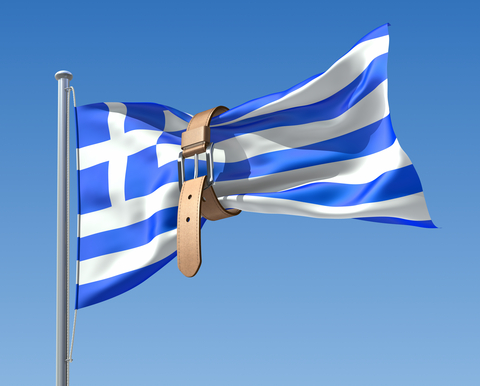 What euro zone countries are finding out is the multiplier work in both directions. That is, when the government reduces it spending or increases taxes, money (that would normally be spent) is taken from individuals and businesses.

As a result, the food chain contracts in the opposite direction, i.e. because businesses and individuals spend not as much, others who depend on them also have less to spend.

Therefore, one can think of austerity measures as a fiscal stimulus in reverse. This somewhat simplified explanation helps us know what is happening in  euro zone countries and what is likely to occur in the US, unless we are mindful.

In the US, everyone is biting their nails over the latest unemployment report. The Labor Department found that unemployment decreased from 8.2% to 8.1% in April.

However, the more important issue was only 115,000 new jobs were created – less than one-half the amount created from December through February.

The slowdown in growth raises ominous concerns over the direction of the US economy. The big question is whether we are at a temporary bump in the road; or a new slow growth trend. If it is the second then fear and lack of confidence may set in.

There are still 12.5 million people unemployed and the overall unemployment rate is more than three percentage points higher than it was at the peak of the last business cycle in late 2007.

The labor-market  picture is even cloudier because large numbers of persons dropped out of the labor market and as such are not counted among the ranks of the unemployed. Last month, 103,000 workers became discouraged and drop out of the labor force because they could not find work.

Two things are evident when one examines the behavior of the US economy. First, the economic recovery which started in June of 2009 has unfolded in cycles (i.e. ups and downs) rather than as a linear straight line where in more and more jobs are continually created.

Second, government sector cuts in spending and employment have damaged overall economic output. For example, overall GDP growth during the first quarter of 2012 was 2.2%. If the contraction in government had not occurred, GDP growth would have been a full percentage point higher. Specifically, government contraction at the federal, state and local levels subtracted -.92% from GDP growth.

Euro zone countries have become the masters of austerity programs, especially the big five, Greece, Portugal, Italy, Ireland and Spain.  Their austerity cutbacks have reduced income and GDP growth so extensively that balancing the budget has become virtually impossible.

Last week, the International Labour Organization (ILO) warned that global employment is imperiled because of the austerity measures, especially in euro zone countries. Raymond Torres, the author of the ILO report told the BBC “Austerity on its own doesn’t work.”

The first Euro zone country to implement austerity was Portugal. The Wall Street Journal published a timeline that charts the implementation of these devastating policies. In January of 2010, Portugal pledged to reduce its GDP growth, freeze wages and reduce payrolls in exchange for loan assistance.

In March of 2010, the Greek Government outlined its new austerity plan, which called for cuts in civil-service salaries, and increases in sales tax. Immediately afterwards, Portugal froze public sector wages and increased taxes; Spain did the same thing.

The table below indicates how dangerous these policies have been on GDP growth. The most obvious factor in the charts is that by 2011, the countries that implemented the most stringent austerity measures were among the slowest growing in the euro zone. 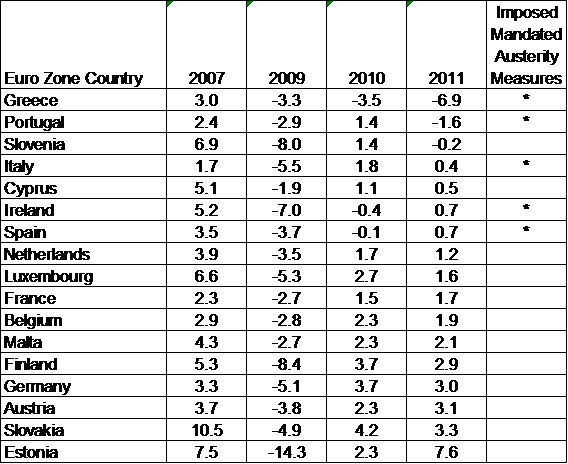 Greece has been subjected to the severest austerity experience, and its GDP growth was -6.9% in 2011. It was followed by Portugal (-1.6%) and finally, Italy, Ireland and Spain. The GDP of the latter three countries grew by less than one percentage point each during 2011.

The implication is that if the US wants a result that is different from that of the euro zone countries, then budget balancing policies should be pursued differently.  The US should not focus exclusively or primarily on cutting spending and government payrolls. Instead, it should pursue a balanced approach that will reduce the deficit and encourage economic growth simultaneously.

Like
Previous Story:
South Africa’s March toward MDGs
Next Story:
Obama to the Rescue? The G8 at Camp David